Take a walking tour of the Jewish quarter of Berlin while also practising your language skills.

Join us on this historical walk around a small section in the Mitte district which many Jews called their home before WWII. On this trip of German history you will also be able to practise your German speaking skills. Literally meaning the ‘middle’, the Mitte’s cobblestone streets and the architectural elegance of its houses, exude an early 20th century vibe. Mitte suffered from serious damage during the second world war, but the structures were repaired and restored to their former glory

This is a very important tour that retraces Jewish history during Nazi Germany.  On this walk you will visit the Neue Synagogue (now Berlin's main Synagogue).  You will visit a memorial to Otto Weidt (a relatively unknown Hero in comparison to the inspirational Oscar Schindler) who saved blind and deaf Jews by employing them in his factory). The memorial is at the site of the factory.

You will also visit  Hackescherhöfe (a courtyard complex that was once owned by a German Jew and is now a listed site).

Included also is the site of the oldest Jewish cemetery in Berlin. Amongst other things you be able to see the ‘Stumbling Stones’ (a Europe-wide project that involved small brass plated cobblestones to commemorate the site of where a victim of the Holocaust either worked or lived). 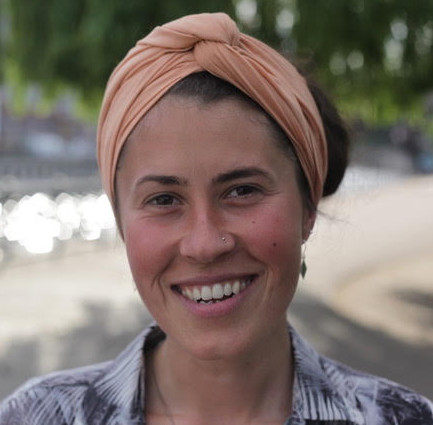 Sarah is originally from Australia. Having first completed a degree in Business Marketing and working in the Advertising industry she thought her future was decided. She then went on a trip to Europe and as a result stumbled upon Berlin. Having immediately fallen in love with the city, she never left! She has been sharing her love for the city with visitors for seven years now. Sarah has always been fascinated with history and finds great joy in being able to share that passion and love for Berlin with visitors from all over the world.